Anglo-Russian designer Sophie Fedorovitch (1893–1953) was a key figure in British ballet. She is best remembered for her collaborations with Frederick Ashton, which included his first ballet A Tragedy of Fashion in 1926 and subsequently Les Masques, Mephisto Valse, Le Baiser de la fée, Nocturne, Horoscope, Dante Sonata, Symphonic Variations and his production of Gluck’s Orpheus and Eurydice. She also created designs for Andrée Howard’s La Fête étrange and Veneziana. She also worked in opera, and for the Covent Garden Opera Company (later The Royal Opera) created designs for La traviata and Madama Butterfly.

Fedorovitch was born in Minsk to Polish parents. She studied art in Kraków and on graduation returned to Russia, before emigrating to the West in 1920. She held her first solo show at the Beaux-Arts Gallery in London in 1928. Her first work for ballet was on Frances James’s Les Nénuphars (1926) but she did not focus on ballet until 1932. Around this time she settled permanently in London, becoming a British citizen in 1940. She was on the advisory panel for Sadler’s Wells Ballet (later The Royal Ballet) 1951–3.

Fedorovitch’s collaborations with Ashton played a crucial part in the development of British ballet. He dedicated A Month in the Country to her memory, and wrote ‘Her method of designing seemed to be a process of elimination, clearing the stage of all unnecessary and irrelevant details’.

Butterfly’s sanctuary: The long history of Madama Butterfly at the Royal Opera House 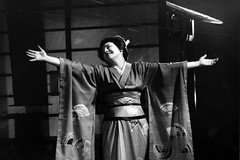 From the opera’s UK premiere in 1905 through to the present day, Puccini’s much-loved opera has a long and close relationship with Covent Garden.