American soprano Sondra Radvanovsky made her Royal Opera debut in 2006 as Roxane (Cyrano de Bergerac) and has since sung Lina (Stiffelio), Leonora (Il trovatore), Floria Tosca and the title role in Manon Lescaut with The Royal Opera. In the 2018/19 Season she sings Maddalena di Coigny (Andrea Chénier) for the Company.

Radvanovsky performs regularly in concert, her engagements including Beethoven’s Symphony no.9 with the Boston Symphony Orchestra, Rossini’s Stabat Mater with the Orchestra of the Age of Enlightenment and Verdi’s Requiem with the Chicago Symphony and Vienna Symphony Orchestra. Her recordings include Verdi arias and Verdi scenes with Dmitri Hvorostovsky.

Your Reaction: What did you think of Puccini's Manon Lescaut? 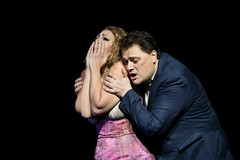