Russian composer and pianist Sergey Prokofiev (1891–1953) wrote two of the greatest 20th-century ballet scores, Romeo and Juliet and Cinderella. His symphonic fairytale Peter and the Wolf has frequently been adapted for dance. His many operas include The Love for Three Oranges, The Gambler, Betrothal in a Monastery and War and Peace. These stage works sit alongside a huge body of orchestral and piano works.

Prokofiev began studying piano with his mother aged four, and at this age also started to compose. He composed his first opera, The Giant, aged ten. He graduated from the St Petersburg Conservatory in 1909 and travelled to Europe in 1913, making his European debut with his Second Piano Concerto in Rome in 1915. He soon after wrote his ‘Classical’ First Symphony, arguably the first neoclassical work. After two years in the USA he returned to Europe in 1920, and in 1936 moved to the Soviet Union, where his works were increasingly popular. Though Prokofiev had worked largely unrestrained under the Soviet regime, a 1948 edict resulted in the ban of many of his works and left him deeply shaken. Prokofiev never recovered his health and died 5 March 1953, the same day as Stalin.

Throughout his life Prokofiev innovated his choreographic style. Common to all his works is a spirit of Russian Romanticism married with a unique understanding of modernism.

Choreographer Kenneth MacMillan captures the beauty and emotion of Shakespeare's text in one of ballet’s most iconic love duets.

Venice has provided setting and inspiration for countless operas 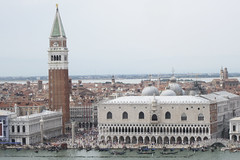 The city has an important association with the art form that reaches from I due Foscari to Death in Venice.