Australian tenor Samuel Sakker was a member of the Jette Parker Young Artists Programme 2014–16, during which time his roles included Alfredo Germont and Gastone de Letorières (La traviata), Barbarigo (I due Foscari), First Man in Armour (Die Zauberflöte), Sandy/First Officer (The Lighthouse, Meet the Young Artists Week), Patacha (L’Étoile) and Minister of Justice (Un ballo in maschera) for The Royal Opera, Malcolm (Macbeth) and Mozart’s Requiem on The Royal Opera’s tour to Japan and Song of the Earth for The Royal Ballet. In the 2016/17 Season he was a Company Principal of The Royal Opera, singing roles including Ruiz (Il trovatore), Marschallin’s Major Domo (Der Rosenkavalier), Ulrich Eisslinger (Die Meistersinger von Nürnberg), Gastone de Letorières, Pang (Turandot) and in The Nose. In the 2017/18 Season he returns to sing Mainfroid (Les Vêpres siciliennes).

Sakker was born in Sydney and studied at the Queensland Conservatorium, Griffith University. During his studies he performed with Opera Queensland and on graduation from the Conservatorium he joined the chorus of Opera Australia, where he sang as a soloist in a New Year’s Eve gala, and in Manon, Capriccio, Candide and the world premiere of Brett Dean’s Bliss. Sakker’s roles elsewhere include Cavaradossi (Tosca) for English Touring Opera, Young Servant (Elektra) and Fenton (Falstaff) for West Australian Opera, Trin (La fanciulla del West) for Opera Queensland, Don Ottavio (Don Giovanni) for Oz Opera and Alfredo for New Zealand Opera, and he appeared in the Verdi 100th Birthday Gala for Melbourne Opera and in Bottesini’s Requiem at the Brisbane Festival.

Sakker received a scholarship from the Dame Nellie Melba Trust for two years running. He was a finalist in the Australian Singing Competition, winning the Foster Audience Vote Award, the Royal Northern College of Music Award and the Universal Records Prize. Other awards include second prize in the More than Opera German-Australian Opera Grant and second prize in the Herald Sun Aria Competition. 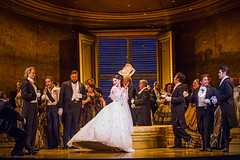 What did you think of Richard Eyre's production of Verdi's iconic opera?

Young Artist Profile: Samuel Sakker – 'Opera gives people a chance to put down their phone and experience something really human’ 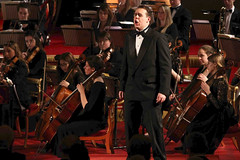 The Australian tenor on the power of the art form.

Samuel Sakker as Pang, David Junghoon Kim as Pong, Roberto Alagna as Calaf and Leon Košavić as Ping in Turandot, The Royal Opera

Samuel Sakker as Patacha, Samuel Dale Johnson as Zalzal and Christophe Mortagne as King Ouf I in rehearsal for L'Étoile, The Royal Opera

Samuel Sakker as Patacha and Samuel Dale Johnson as Zalzal in rehearsal for L'Étoile, The Royal Opera

Plácido Domingo and Samuel Sakker in I due Foscari, The Royal Opera