English soprano Sally Matthews was a member of The Royal Opera’s Young Artists Programme 2001–03 and made her debut with the Company as Nannetta (Falstaff) under Bernard Haitink. Since leaving the Programme her roles with The Royal Opera have included Pamina (Die Zauberflöte), Sifare (Mitridate, re di Ponto), Fiordiligi (Così fan tutte), Anne Trulove (The Rake’s Progress), Blanche de la Force (Dialogues des Carmélites) and Silvia (The Exterminating Angel, role creation).

Matthews was born in Southampton. She was encouraged to dance from the age of three and performed the role of Eliza in a school production of My Fair Lady aged 15. She was awarded a scholarship to study at Guildhall School of Music and Drama, and while there won the 1999 Kathleen Ferrier Award. From 2002 to 2004 she took part in the BBC Radio 3 New Generation Artists scheme. She has sung with such companies as Glyndebourne Festival Opera, Bavarian State Opera, La Monnaie, Brussels, Dutch National Opera, Vienna State Opera, Opera Australia and Salzburg Festival, in repertory ranging from Cavalli’s La Calisto to the title role in Unsuk Chin’s Alice in Wonderland.

Matthews gives regular concerts and recitals, including performances at the BBC Proms, The Creation with Sir Colin Davis, Ellen Orford (Peter Grimes) in concert with Accademia Nazionale di Santa Cecilia under Antonio Pappano and recitals with Simon Lepper at the Concertgebouw, Amsterdam, and Wigmore Hall. Her many recordings include Ännchen (Der Freischütz) under Colin Davis and a selection of Lieder. 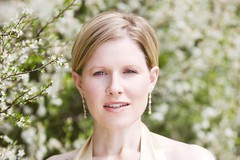