Davies studied at the Royal Manchester College of Music (now the Royal Northern College of Music) and began his career in the Glyndebourne Festival Chorus, where he was awarded the John Christie Award. He has performed regularly for all the leading British companies, for many international opera companies and for festivals including the Salzburg Festival. Since 2009 his appearances have included Shepherd (Tristan und Isolde) for La Scala, Milan, Hauk-Sendorf (The Makropulos Case) and Monsieur Taupe (Capriccio) for Paris Opéra and Emperor Altoum for Scottish Opera. Other roles include Dr Caius (Falstaff), Guillot de Morfontaine (Manon), Reverend Adams (Peter Grimes) and Sellem (The Rake’s Progress).

Davies appears on many recordings, including works by Handel, Mozart, Britten and Stravinsky. He has taught singing for more than twenty years, including at the Royal Academy of Music. 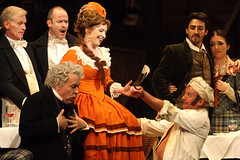