Italian dancer Roberto Bolle made his Royal Ballet debut in 1999 as a Guest Artist, dancing Prince (The Nutcracker) opposite Darcey Bussell. He has since returned regularly as a Guest Artist, dancing such roles as Romeo, Apollo, Albrecht (Giselle), Prince Siegfried (Swan Lake), Prince Désiré (The Sleeping Beauty), Solor (La Bayadère), Aminta (Sylvia), Armand (Marguerite and Armand) and Des Grieux (Manon), Eugene Onegin (Onegin) and in ballets including Les Rendezvous, Thaïs pas de deux, In the middle, somewhat elevated and Remanso, and in galas and on tour with the Company.

Bolle was born in Piedmont. He trained there and, from the age of 12, at the ballet school of La Scala, Milan. He graduated into the company and was promoted to principal in 1996, aged 21. He was made an étoile in 2004. He dances regularly as a guest artist with the world’s leading companies, including the Mariinsky, the Bolshoi and Paris Opera Ballet, and in 2009 was made a principal of American Ballet Theatre in addition to his position with La Scala. Since 2000 he has given regular gala performances as part of Roberto Bolle and Friends, across Italy and around the world. Other engagements include dancing in a gala performance in Buckingham Palace in celebration of HM The Queen’s Golden Jubilee.

Bolle was awarded Young Global Leader by the World Economic Forum in 2009, and was appointed Cavaliere dell’Ordine al Merito della Repubblica Italiana in 2012. His films include Roberto Bolle – L’arte della danza (2016), a documentary based on the 2015 summer tour of Roberto Bolle and Friends. 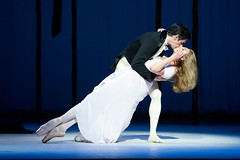 Former dancers and guest artists of The Royal Ballet return to Covent Garden as part of a mixed programme of works by Frederick Ashton. 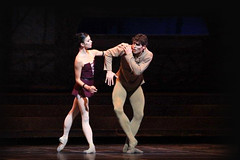 Roberto Bolle and Zenaida Yanowsky in Marguerite and Armand.

Zenaida Yanowsky and Roberto Bolle in Marguerite and Armand

Zenaida Yanowsky and Roberto Bolle in Marguerite and Armand