Jones trained at Central Saint Martins College of Art and Design. His West End credits include Committee, Lettice and Lovage, The Girls, Kiss Me Kate, The Wizard of Oz, The Sound of Music, The Prime of Miss Jean Brodie, The Secret Rapture, Benefactors, Calendar Girls, Jolson and The Sound of Music. He has designed more than fifteen productions for the Royal Shakespeare Company, including Romeo and Juliet, Twelfth Night, The Merchant of Venice, Hamlet and Othello, and productions for the National Theatre including Look Back in Anger, Noises Off (West End and Broadway) and The Playboy of the Western World. Other theatre work includes credits with the Donmar Warehouse, Chichester Festival Theatre, Hampstead Theatre, Almeida Theatre, Manchester Royal Exchange and on Broadway. Film work includes Hamlet for BBC Films/Illuminations. 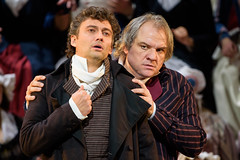