Balsadonna was born in Venice and studied philosophy, piano and composition. He worked as a répétiteur in Italy before becoming Assistant Chorus Master in Basle and later at La Monnaie, Brussels. He was appointed Chorus Director at La Monnaie in 1997 under Antonio Pappano and later joined Pappano with The Royal Opera. 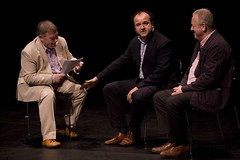 Antonio Pappano and Renato Balsadonna in rehearsal for Król Roger, The Royal Opera