Evans was born in Pontrhydhyfen in South Wales. She originally trained to be a nurse before being advised by Bryn Terfel to study at Guildhall School of Music and Drama. She appears regularly with Welsh National Opera and sings with opera companies around the world, including the Metropolitan Opera, New York, Lyric Opera Chicago, English National Opera and the Bavarian State Opera. She has recorded prolifically, and in 2008 her recording of Hänsel und Gretel with Charles Mackerras received a Grammy Award. She appears regularly in concert, including at the BBC Proms, and has been on the jury for the BBC Cardiff Singer of the World Competition. Her repertory includes many Handel and Mozart soprano roles, Adina (L’elisir d’amore), Adele (Die Fledermaus), Alice Ford (Falstaff), Mimì, the Marschallin (Der Rosenkavalier), Anne Trulove (The Rake’s Progress) and the Governess (The Turn of the Screw).

Evans currently lives in Penarth, South Wales. She is passionate about coaching young singers and is an Honorary Fellow of the Royal Welsh College of Music and Drama. She is Vice President of the Welsh homelessness charity Shelter Cymru, and is a passionate advocate of the Welsh language. 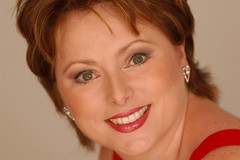 Welsh soprano to replace Sally Matthews in the role of Countess Almaviva.

Rosie Aldridge as Russian Nanny in Death in Venice, The Royal Opera

Andrew Tortise as Boy Player and Rebecca Evans as Girl Player in Death in Venice, The Royal Opera

Gerald Finley as the Leader of the Players in Death in Venice, The Royal Opera

Rebecca Evans as Strawberry Seller and Mark Padmore as Gustav von Aschenbach in rehearsal for Death in Venice, The Royal Opera

Andrew Tortise as Boy Player and Rebecca Evans as Girl Player in rehearsal for Death in Venice, The Royal Opera