Aceto grew up in Brunswick, Ohio, and first discovered a love of singing through his rock band at school, with whom he also played guitar. He went on to study at Bowling Green State University. On graduating he joined the Metropolitan Opera’s Lindemann Young Artist Development Program, and made his debut in Tosca, singing the Gaoler opposite Luciano Pavarotti as Cavaradossi. Aceto appears regularly with the Metropolitan Opera, and with other American companies including those of San Francisco, Dallas, Chicago, Santa Fe, Houston, San Diego and New Orleans. His international appearances have included performances at the Arena di Verona and with Deutsche Oper Berlin. 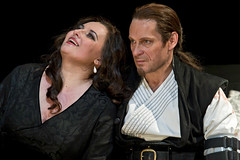