British director Ramin Gray made his Royal Opera debut in 2013 directing Gerald Barry’s opera The Importance of Being Earnest in the Linbury Studio Theatre, revived in the 2015/16 Season in the Barbican Theatre.

Gray was born in London and grew up in Oxford, Tehran, New York and Paris. He studied at Oxford University and trained on the Regional Theatre Young Director Scheme. In the 1990s he focussed on directing new plays by playwrights including Jon Fosse, Paul Godfrey and Gregory Motton at the Gate Theatre, Odéon Théâtre de l’Europe and Théâtre de Gennevilliers. In 2000 he joined the Royal Court as International Associate and continued to work there until 2009 as Associate Director, directing more than fifteen world or UK premieres by playwrights such as Marius von Mayenburg, Mark Ravenhill, Roland Schimmelpfennig and Simon Stephens. Work elsewhere includes productions for the Royal Shakespeare Company, Salzburg Festival, Schauspielhaus Wien and Praktika Theatre, Moscow. He is currently Artistic Director of the Actors Touring Company, for which he has directed David Greig’s The Events (Traverse, Young Vic and New York Theatre Workshop) and Marius von Mayenburg’s Martyr (Unicorn Theatre and on tour). 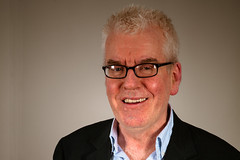 Director Ramin Gray in rehearsals for The Importance of Being Earnest

Director Ramin Gray in rehearsals for The Importance of Being Earnest