Pyotr Il’yich Tchaikovsky (1840–93) engendered a new style of Russian music that incorporated developments of the Western European musical tradition while remaining integrally Russian. His three full-length ballet scores, Swan Lake, The Sleeping Beauty and The Nutcracker, are the masterpieces of the Classical tradition. His operas combine a gift for lyricism with a sensitive response to words and sophisticated dramatic structure, with Eugene Onegin, Mazeppa and The Queen of Spades among his greatest works.

Tchaikovsky was born in rural Russia and began studying the piano aged four. Aged ten he entered the St Petersburg School of Jurisprudence and studied there 1852–9. He graduated into the Ministry of Justice and worked there for two years before dedicating himself to music. He studied at the newly opened St Petersburg Conservatory 1862–5 under Nikolay Rubinstein and moved to Moscow early in 1866 to teach there at the Conservatory. Works from this period include the first four symphonies, his three string quartets, numerous songs and piano works, the operas Voyevoda, Oprichnik, Vakula the Smith and Eugene Onegin, incidental music for The Snow Maiden and Swan Lake. After the end of his short-lived marriage Tchaikovsky travelled around Europe, writing such works as the Second Piano Concerto, the Serenade for Strings, his first three orchestral suites and the operas The Maid of Orleans and Mazeppa. In 1885 he settled in Klin, where in addition to composing such works as Manfred, the Fifth Symphony and Cherevichki he began his conducting career. From 1889 he rose to international prominence and wrote such masterpieces as The Queen of Spades, The Sleeping Beauty and the Sixth Symphony.

With music both melodically rich and brilliantly structured, Tchaikovsky was a pioneer both for ballet and Russian music. 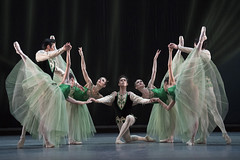