Yende has appeared in concert in London, Vienna, Munich, Amsterdam, Cape Town and at Carnegie Hall.

Pretty Yende’s opera journey: ‘Music is a gift to humanity’ 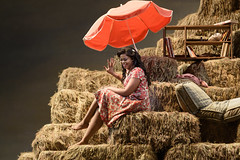 The award-winning South African soprano reflects on her musical journey, from church hymns with her grandmother to the world’s top opera houses.

Donizetti's comic tale of trickery and deception has delighted and surprised audiences for centuries.