Peter Mario Katona is Director of Casting at The Royal Opera. He joined the Company in 1983 as Artistic Administrator. Throughout his time with The Royal Opera he has been involved in planning and casting all of the Company’s performances, in collaboration with Music Directors Colin Davis, Bernard Haitink and, since 2002, Antonio Pappano.

Born in Berlin, Katona grew up in a musical family. His mother Marianne Warneyer was a leading soprano with the Stuttgart Opera, and his father, Hungarian-born Julius Katona, sang in opera houses across Germany. Katona studied Music and German literature at the University of West Berlin, and began his career as a classical music critic before becoming assistant to Christoph von Dohnányi, Music Director of Frankfurt Opera, in 1968. In 1977 he became Head of Artistic Management, Planning and Casting at Hamburg State Opera, a position he held until his move to Covent Garden.

Over the past 30 years in his work for The Royal Opera Katona has given important early career opportunities to a number of the world’s leading opera singers. He has also been a frequent jury member in many international singing competitions, most notably Domingo's Operalia, and other major competitions in Barcelona, Toulouse, Athens and Warsaw. He has built a reputation as one of the most experienced and respected casting directors working today. 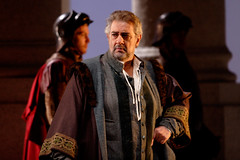 Our quick introduction to Plácido Domingo’s international opera competition which has launched the careers of artists including Nina Stemme, Joyce DiDonato, Rolando Villazón and Erwin Schrott.