English actor Paterson Joseph made his Royal Opera debut in 2015 as the narrator of Rise and Fall of the City of Mahagonny, for which he also presented the cinema relay.

Joseph’s many television appearances include roles in Law and Order, Case Histories, The Fixer, Survivors, Green Wing, Soldier Soldier and Casualty. He has performed in several radio plays for BBC Radio 4, and appeared in films including The Other Man, The Beach and Aeon Flux. 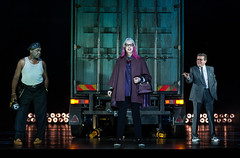