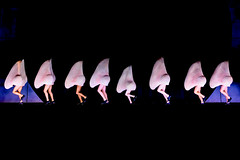 Dancer Cameron Ball reveals what it's like performing in Barrie Kosky’s surreal Royal Opera production of Shostakovich’s The Nose.