Lancaster was born in London and studied at Oxford University, where he contributed cartoons to the university magazine Cherwell, and at the Slade School of Art. He worked with his friend John Betjeman as assistant editor at the Architectural Review and in 1936 released his first book, Progress at Pelvis Bay, satirizing architecture and social life. He was appointed cartoonist to the Daily Express in 1939, and over the next forty years drew approximately 10,000 pocket cartoons for the paper. During World War II he joined the press censorship bureau and was stationed in Greece 1944–6 as part of the Foreign Office press attaché. In 1951 he worked with John Piper on designs for the Festival of Britain and that year on Piper’s recommendation created his first set designs with Pineapple Poll.

Lancaster’s many other theatre designs included The Rake’s Progress (UK premiere), L’italiana in Algeri and Falstaff for Glyndebourne Festival Opera, Don Pasquale for the then Sadler’s Wells Opera and Hotel Paradiso, Zulrika, Candide and All’s Well that Ends Well in theatre. He was appointed a CBE in 1953 and knighted in 1975. 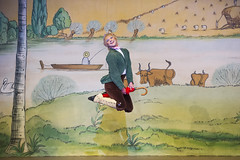 Cartoonist Osbert Lancaster's designs for Frederick Ashton’s bucolic masterpiece have drawn criticism over the years – but they play an important part in the ballet’s larger-than-life charm.