Costume designer Nicky Gillibrand made her Royal Opera debut in 1997 on Paul Bunyan, directed by Francesca Zambello, and has since designed costumes for The Queen of Spades, also directed by Zambello, and for Lady Macbeth of Mtsensk, L’Heure espagnole/Gianni Schicchi, The Gambler, Il trittico, Anna Nicole and Boris Godunov, all directed by Richard Jones. For The Royal Ballet she has created designs for Will Tuckett’s Proverb on the main stage and The Wind in the Willows in the Linbury Studio Theatre.

Gillibrand’s other opera designs include Don Giovanni, The Girl of the Golden West (also Santa Fe), Rodelinda, The Magic Flute, Pelléas and Mélisande and Don Giovanni for English National Opera, La traviata, Hansel and Gretel, Don Carlos and Wozzeck for Opera North, Rusalka in Copenhagen, Die Zauberflöte for Aix-en-Provence Festival, The Fiery Angel for La Monnaie, Brussels, War and Peace in Paris and Cendrillon, Der Rosenkavalier, The Rape of Lucretia, The Miserly Knight/Gianni Schicchi and Flight for Glyndebourne.

Gillibrand’s work in theatre includes costume designs for Billy Elliot: the Musical on the West End, The Tempest and A Midsummer Night’s Dream for the Royal Shakespeare Company, The Twilight Zone for the Almeida Theatre, Absolute Hell, Angels in America, Everyman, Jumpers, The Seagull and Tales from the Vienna Woods for the National Theatre and several productions for the Young Vic, including Once in a Lifetime, Public Enemy, The Government Inspector, Annie Get Your Gun, The Good Soul of Szechuan and Vernon God Little. Her awards include the gold medal at the 2003 Prague Quadriennale for A Midsummer Night’s Dream.

Dance Essentials: The Wind in the Willows 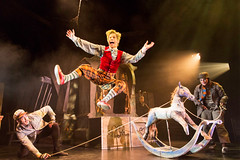