Greek designer Nicholas Georgiadis (1923–2001) won renown for his ballet designs, particularly in collaboration with Kenneth MacMillan. His MacMillan designs for The Royal Ballet include Romeo and Juliet, Mayerling, Manon, Song of the Earth, The Prince of the Pagodas, The Invitation, Danses concertantes and Las hermanas. His many other works for the Company include Orpheus and The Tempest (each Evening Standard award winners) and Rudolf Nureyev’s production of Swan Lake. For The Royal Opera he created designs for Aida (1968) and Les Troyens (1969).

Georgiadis was born in Athens and studied at the National Metsovian University before winning a Fulbright scholarship in 1952 to study at Columbia University, New York. The following year he moved to London to study stage design at the Slade School of Fine Art, where he later became a lecturer. His designs came to the attention of Ninette de Valois and he began his partnership with MacMillan immediately on graduation, creating designs for Danses concertantes in 1955. In addition to his work with MacMillan, Georgiadis developed a close partnership with Nureyev, creating designs for his production of The Sleeping Beauty (London Festival Ballet) and several works for Paris Opera Ballet. His many opera productions included Medea (Frankfurt), La clemenza di Tito (Aix-en-Provence) and Don Giovanni and La traviata (Greece).

Georgiadis painted throughout his career and exhibited widely, at galleries including the Redfern Gallery and at the Venice Biennale. He was appointed a CBE in 1984 and admitted to the Greek Academy of Arts in 2000.

ROH Collections Item of the Month: The historic costumes for MacMillan’s Romeo and Juliet 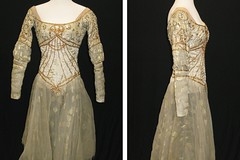 Fifty years after the ballet had its premiere, we take a look at the beautiful costumes for MacMillan’s iconic ballet.

Sarah Lamb as Juliet in Romeo and Juliet

Sarah Lamb as Juliet in Romeo and Juliet