Gillespie was born in Glasgow and studied at the Royal Scottish Academy of Music and Drama with Duncan Robertson. He took part in masterclasses with Peter Pears and Heather Harper at the Britten-Pears School and attended the European Centre for Opera and Vocal Studies in Belgium. He also studied with Nicolai Gedda. His repertory includes Count Almaviva (Il barbiere di Siviglia), Tamino (Die Zauberflöte), Bacchus (The Olympians) and Sailor (Dido and Aeneas) and he has sung with companies such as Opéra de Lyon, New Israeli Opera and English National Opera.

In addition to his singing career Gillespie is a freelance photographer.

The Tsar's Bride: view from the Chorus 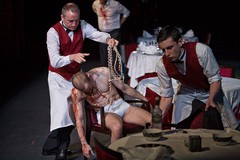 Neil Gillespie as Giuseppe in La traviata, The Royal Opera

Liparit Avetisyan as Alfredo Germont and Neil Gillespie as Giuseppe in La traviata, The Royal Opera