American lighting designer Natasha Katz has a strong creative relationship with Christopher Wheeldon, and for The Royal Ballet has collaborated with him on Tryst(2002), Alice’s Adventures in Wonderland (2011) and The Winter’s Tale (2014). She has also worked on Cyrano de Bergerac (2006), directed by Francesca Zambello, for The Royal Opera.

Katz’s permanent audio-visual shows include The Masquerade Village at the Rio Casino, Las Vegas, and Big Bang at the Hayden Planetarium in New York.

Christopher Wheeldon’s ballet adaptation is a true collaborative effort, with spectacular designs from all the creative team coming together to tell the story. 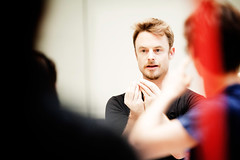