Karyazina’s concert engagements include Rossini’s Petite Messe solennelle with Laurens Collegium Rotterdam. Her many awards include third prize at Operalia in 2012 and second prize at the Savonlinna International Singing Competition.

Young Artist Profile: Nadezhda Karyazina - 'If your performance is from the heart, you can always connect with the audience' 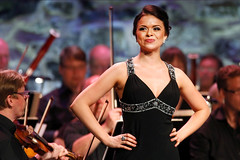 The Russian mezzo-soprano on working with the best coaches in the world, BP Big Screen performances and the challenges of Madama Butterfly.