Russian choreographer Mikhail Fokine was born in St Petersburg in 1880 and trained at the Imperial Ballet Academy before joining the Mariinsky Theatre. In 1904 he became a premier danseur and the following year he created his first choreographic work, Acis and Galatea, for a pupils’ performance, and The Dying Swan, which would become Anna Pavlova’s most famous role.

Fokine was engaged by Diaghilev for his 1909 Paris season and created Le Pavillon d’Armide, Polovtsian Dances, Les Sylphides and Cleopâtre. He worked for some time for both the Imperial Theatre and for Diaghilev; he did not return to Russia after 1918. For Diaghilev his works include Le Carnaval, Sheherazade, Firebird, Le Spectre de la rose, Narcisse, Petrushka, Papillons and The Golden Cockerel. When he left Diaghilev’s company he worked as a freelance choreographer, creating new works and reviving his successes. He settled in the USA, where he worked with several dance companies, and in musical theatre and film. The Fokine American Ballet Company made its debut in 1924. Fokine, however, spent much of his time in Europe, and in 1936 was engaged as choreographer-in-chief by the Ballet Russe de Monte Carlo, where he created three successful ballets – L’Épreuve d’amour, Don Juan (both 1936) and Les Éléments (1937). He died in 1942, having created more than sixty works.

The beauty of simple movements: Who was Isadora Duncan? 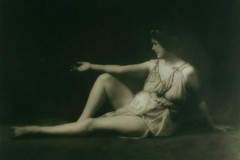 This pioneer of modern dance courted controversy in her lifetime, but her memory has continued to influence the way we think about dance today.

The myths behind the ballets: A quick guide to Sampling the Myth 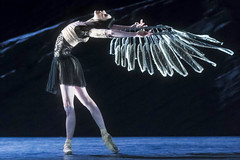 Dance has long been inspired by myths and folk tales, with Deloitte Ignite offering extracts of classics and new works on one bill.

Annette Page as The Firebird and Ronald Hynd as Ivan Tsarevitch in The Royal Ballet revival of The Firebird, 1959 photograph by Roy Round

Yulia Stepanova in The Firebird