American costume designer Mattie Ullrich made her Royal Opera debut in 2014 with I due Foscari, directed by Thaddeus Strassberger. 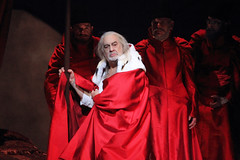