English conductor Mark Wigglesworth made his Royal Opera House debut in 1996 conducting Welsh National Opera’s production of The Rake’s Progress on the main stage. He has since returned to conduct Die Meistersinger von Nürnberg and Rise and Fall of the City of Mahagonny for The Royal Opera. He returns in the 2018/19 Season to conduct From the House of the Dead.

His recordings include a cycle of Shostakovich symphonies with the BBC National Orchestra of Wales and the Netherlands Radio Philharmonic, Mahler’s Symphonies no.6 and no.10 with the Melbourne Symphony, Peter Grimes for Glyndebourne, and the Brahms Piano Concertos with Stephen Hough. He has written articles for The Guardian and The Independent, made a six-part TV series entitled Everything to Play For (BBC) and held positions as Principal Guest Conductor of the Swedish Radio Symphony, Music Director of the BBC National Orchestra of Wales, and Music Director of English National Opera. His book The Silent Musician is published by Faber & Faber.

Listen: It may be tuneful, but Weill’s music underlines a ‘dark, cynical message’ 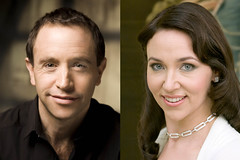 Conductor Mark Wigglesworth and mezzo-soprano Christine Rice discuss the juxtaposition of music and text in Rise and Fall of the City of Mahagonny.