Latvian soprano Marina Rebeka made her Royal Opera debut as Violetta Valéry (La traviata) in July 2010 and returned to sing the role in 2015. 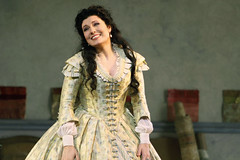 Four years after stepping in for a single performance of La traviata, the remarkable soprano returns to the Royal Opera House.

Marina Rebeka as Violetta and Dmytro Popov as Alfredo in La traviata, The Royal Opera