French director Mariame Clément made her Royal Opera debut in the 2015/16 Season directing The Royal Opera’s premiere of Chabrier’s L’Étoile.

Clément was born in Paris. She studied art history and literature at the Ecole normale supérieure there. She worked as a teaching assistant in French at Harvard University before moving to Berlin to study art history, focussing on medieval Persian miniature painting. While there she worked as an intern at the Berlin State Opera, going on to further internships and assistant directing work in Berlin, Paris, Strasbourg and Montpellier. In 2003 she won third prize at the European Opera Directing Competition, and in 2004 made her debut as a director with Il signor Bruschino/Gianni Schicchi for Opéra de Lausanne.

Listen: L’Étoile is ‘not really about the plot but about the silliness of it all’ 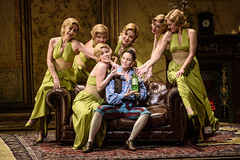 Mariame Clément in rehearsal for L'Étoile, The Royal Opera