Davidsen studied singing at the Grieg Academy of Music in Bergen, and as a student sang in the Norwegian Soloists Choir as a mezzo-soprano. She switched to soprano repertory while studying for her Masters degree at the Royal Danish Academy of Music. She made her Royal Danish Opera debut in the 2012/13 season as Dog and Owl (The Cunning Little Vixen). Subsequent roles for the company have included Rosalinde (Die Fledermaus). She graduated from Copenhagen’s Opera Academy in 2014. Since 2015, she has appeared with opera companies including Vienna State Opera, Teatro Colón, Buenos Aires, Norwegian National Opera, Zürich Opera, Stuttgart Opera and Frankfurt Opera, her roles including Agathe (Der Freischütz), Santuzza (Cavalleria rusticana), Prima Donna/Ariadne (Ariadne auf Naxos), Liza (The Queen of Spades), Isabella (Das Liebesverbot) and Freia/Third Norn. In 2017 she made her Glyndebourne Festival and Vienna State Opera debuts as Prima Donna/Ariadne and her Wexford Festival debut as Cherubini’s Medea. Engagements in 2019 include debuts at the Metropolitan Opera, New York, as Liza, and her Bayreuth Festival debut as Elisabeth (Tannhäuser). 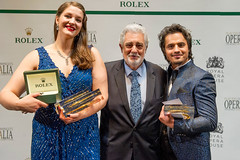 Lise Davidsen as Freia in Das Rheingold, The Royal Opera

Antonio Pappano conducts Lise Davidsen and Jonas Kaufmann in a new production of Beethoven's only opera.