Swedish director, choreographer and movement director Lina Johansson made her Royal Opera debut in 2015 as circus director for Orfeo at the Roundhouse, directed by Michael Boyd.

Johansson grew up in Malmö and trained at London’s Circus Space (now the National Centre for Circus Arts) and in Cuba. In 1999 she co-founded with Silvia Fratelli and Emma Norin the acrobatic theatre company mimbre, and continues as co-director of the company. mimbre fuses acrobatics with theatre and dance and has toured internationally; shows include Bench, Falling Up, Triptic and Until Now.

﻿Orfeo: An opera of debuts and collaborations, and the young people at the heart of it 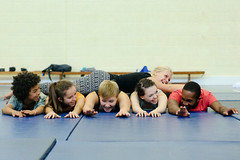 How The Royal Opera and the Roundhouse are engaging with the next generation of artists through Monteverdi’s Orfeo, the first great opera.