English dancer Leanne Cope is a former First Artist of The Royal Ballet. Cope trained at The Royal Ballet School and graduated into the Company in 2003, promoted to First Artist in 2009. She retired from the Company in 2016 to focus on her work on Broadway, having taken a sabbatical from the Company the previous two Seasons to create the role of Lise Dassin (Christopher Wheeldon’s award-winning An American in Paris) for Théâtre du Châtelet and on Broadway.

Cope was born in Bath and began dancing at the age of five. She trained at The Dorothy Colebourne School of Dance before joining The Royal Ballet School White Lodge at the age of 11. Her repertory with the Company included Clara (The Nutcracker), Princess Louise (Mayerling), pas de six (Giselle), White Cat and Red Riding Hood (The Sleeping Beauty), Mustard Seed (The Dream) and roles in Asphodel Meadows, Concerto, Song of the Earth, Sensorium, Four Temperaments and ‘Still Life’ at the Penguin Cafe.

She created several roles for the Company and has a particularly strong relationship with Royal Ballet Artist in Residence Liam Scarlett, who has described her as having ‘a presence on stage like no other’. Cope’s role creations for Scarlett include Emily Dimmock and Annie E. Crook (Sweet Violets) and Gretel (Hansel and Gretel). She also created roles in Wheeldon’s DGV: Danse à grande vitesse and Alice’s Adventures in Wonderland, Jonathan Watkins’s As One, Will Tuckett’s Timecode and works by Scarlett, Watkins and Samantha Raine in The Royal Ballet’s Draft Works. 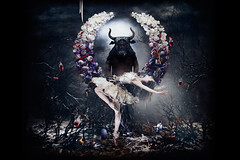 Take a look at our new promo film prior to curtain up on the 2012/13 Autumn Season.

Leanne Cope and Thiago Soares in rehearsals for Sweet Violets