Lithuanian mezzo-soprano Justina Gringyte was a member of the Jette Parker Young Artists Programme 2011–13, during which time her roles included Maddalena (Rigoletto Act III, Plácido Domingo Celebration), Flora Bervoix (La traviata), Wood Nymph (Rusalka), Maddalena (Il viaggio a Reims), Innocent (The Minotaur), Albina (La donna del lago) and Suzy (La rondine). Since leaving the Programme she has returned to The Royal Opera to sing Sixth Flowermaiden (Parsifal) and Maddalena (Rigoletto). Gala performances at the Royal Opera House include an excerpt from Beethoven’s Symphony no.9 in the Olympics Committee Opening Ceremony and Wagner’s Im Treibhaus at the Our Extraordinary World Gala.

Gringyte first trained as a pianist before studying singing at the Lithuanian Academy of Music and Theatre, the Royal Welsh College of Music and Drama, the Accademia Musicale Chigiana and the National Opera Studio. She is is a Samling Artist and since 2006 has learnt with Buddug Verona James. Engagements since leaving the Programme include Carmen for English National Opera, Fenena (Nabucco) for Welsh National Opera and the Savonlinna Festival, Maddalena (Rigoletto) for ENO, Teatro Real, Madrid, and the Bolshoi Theatre and Meg Page (Falstaff) in concert with the City of Birmingham Symphony Orchestra.

In concert and recital Gringyte’s engagements include Verdi’s Requiem in Caracas under Gustavo Dudamel, Mahler’s Symphony no.8 with the London Philharmonia under Esa-Pekka Salonen, an appearance at the Kirsten Flagstad Festival, Norway, Dulcinée (Don Quichotte) for the Chelsea Opera Group at the Queen Elizabeth Hall and songs by Rachmaninoff with Ian Burnside at Wigmore Hall (recorded on the Delphian label). Her awards include the Young Singer Award at the 2015 Opera Awards. 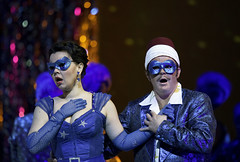 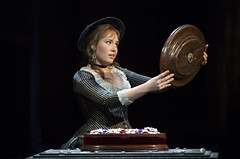 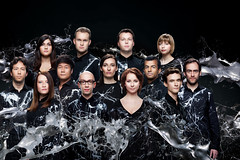 Hanna Hipp as Olga, Pablo Bemsch as Lensky, Justina Gringyte as Larina and Ashley Riches as Onegin in the JPYA Summer Performance