Cope was born in Devon and trained in Wales before attending The Royal Ballet School. He joined the Company in 1982 and was promoted to Soloist in 1985 and to Principal in 1986. He was highly acclaimed as a danseur noble, in classical repertory including Albrecht (Giselle), Solor (La Bayadère), Jean de Brienne (Raymonda), Prince Siegfried (Swan Lake), Prince Florimund (The Sleeping Beauty) and Prince (The Nutcracker); in Ashton repertory including Prince (Cinderella), Beliaev (A Month in the Country), Palemon (Ondine), Armand, Aminta (Sylvia) and Poet (Les Illuminations); in MacMillan repertory including Romeo, Des Grieux (Manon), Rudolf (Mayerling), Rasputin (Anastasia) and Foreman (Judas Tree); and in many other roles, including Apollo. He created roles in MacMillan’s Different Drummer, Le Baiser de la fée and The Prince of the Pagodas, Wayne Eagling’s Frankenstein, Modern Prometheus, Page’s Sawdust and Tinsel, A Broken Set of Rules and Fearful Symmetries, David Bintley’s Galanteries, ‘Still Life’ at the Penguin Café and Les Saisons and Christopher Wheeldon’s Tryst, among others.

In 2003 Cope won the South Bank Show Dance Award and was appointed a CBE. 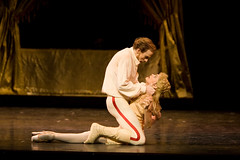 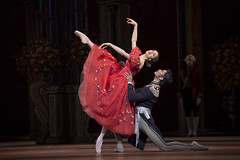 Watch: Members of The Royal Ballet on Swan Lake 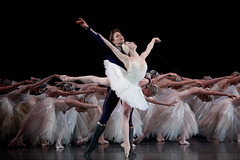 Rehearsal footage and exclusive interviews from the cast and creative team of The Royal Ballet's Swan Lake.

Darcey Bussell and Jonathan Cope in Prince of the Pagodas