Bernays was born in Queensland and studied at Queensland University and at New College, Oxford, where he sang with the choir. He has worked extensively as a freelance concert and opera artist, performing with companies such as English Touring Opera, Kent Opera and Scottish Opera Go Round, at the Théâtre du Châtelet, Paris, and for the Covent Garden and Salzburg festivals. His repertory includes Count Almaviva (Le nozze di Figaro), Guglielmo and Don Alfonso (Così fan tutte), Don Giovanni, Dandini (La Cenerentola), Le Dancaïre (Carmen), Marullo (Rigoletto), Don Fernando (Fidelio), Aeneas (Dido and Aeneas), Zorastro (Orlando), and the Traveller (Curlew River), the Astrologer (The Burning Fiery Furnace) and the Father (The Prodigal Son) in Britten’s Church Parables.

Bernays’s concert performances include Carmina Burana and Fauré’s Requiem at the Barbican, The Creation in Lichfield Cathedral and Australia and the War Requiem at the Three Choirs Festival. His recordings include Christus in Bach’s St John Passion for Naxos. 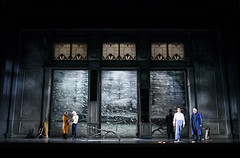 The singers replace Brindley Sherratt in the roles of Prince Gremin and Zaretski.