John B. Read is one of the most distinguished lighting directors working in dance. He was consultant lighting designer to The Royal Opera, The Royal Ballet and Birmingham Royal Ballet 1992–2005. His many original lighting designs for The Royal Ballet include Frederick Ashton’s Rhapsody and The Dream, Anthony Dowell’s staging of Swan Lake, Natalia Makarova’s staging of La Bayadère and Kenneth MacMillan’s The Prince of the Pagodas, The Rite of Spring, Gloria and Romeo and Juliet, and for The Royal Opera, Götz Friedrich’s production of Der Ring des Nibelungen, in addition to many redesigns for revivals.

Read was born in Burnham-on-Crouch and trained at the Rose Bruford College. He made his US debut in 1974 on the American premiere of Death in Venice at the Metropolitan Opera, New York, and has since lit Aida for English National Opera, as well as working for many other opera companies. He has worked with ballet companies around the world, including La Scala, Milan, Stanislavsky Theatre Moscow, and in Stuttgart, Berlin, Vienna, Copenhagen, Stockholm, Helsinki, Oslo and the Netherlands, as well as for Canadian National Ballet, New York City Ballet, American Ballet Theatre, Houston, San Francisco, K Ballet Japan, Rambert Dance Company, London City Ballet and London Festival Ballet. His work has also been seen in the West End and at the National Theatre.

Making Moonshine: How theatres give the impression of moonlight 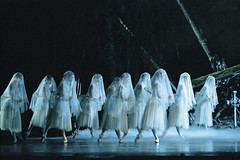 We take a look at history of moonlight on stage in Giselle and beyond.

Members of The Royal Ballet in The Rite of Spring.

Artists of The Royal Ballet in La Valse

Carlos Acosta and Natalia Osipova in Romeo and Juliet

Evgenia Obraztsova and Steven McRae in Romeo and Juliet, The Royal Ballet

The Kingdom of the Shades in La Bayadère.

Valeri Hristov as Ivan Tsarevich in The Firebird

Members of The Royal Ballet in The Rite of Spring.

Sarah Lamb in Gloria, with Thiago Soares and Carlos Acosta

Valeri Hristov and Leanne Benjamin in 'Méditation' from Thaïs

Alexander Campbell and Yuhui Choe in Voices of Spring

Artists of The Royal Ballet in Gloria

Members of the corps de ballet in Gloria, The Royal Ballet