German composer Johannes Brahms (1833–97) was one of the finest composers of orchestral and chamber music of the 19th century. In his lifetime he was often regarded as the successor to Beethoven, Schubert and Schumann. His music also incorporated elements of Renaissance, Baroque and folk music, and the ingenuity of his motivic writing strongly influenced composers such as Schoenberg, Babbitt and Ligeti. His music was frequently used by Isadora Duncan, later commemorated by Frederick Ashton in his Five Brahms Waltzes in the Manner of Isadora Duncan.

Brahms was born in Hamburg, son of a seamstress and a musician. He performed from a young age and began composing in the mid 1840s, while also teaching piano and making arrangements for amateur groups. In 1853 he first met Joseph Joachim and Clara Schumann, who would each become lifelong friends. Brahms reached his maturity as a composer in the 1860s, with key works from this period including the Handel Variations, the G minor Piano Quartet and Ein deutsches Requiem. In 1870 he settled in Vienna and from 1874 maintained an intense performing schedule as both conductor and pianist. He completed his Symphony no.1 in 1876 and in the following decade composed his greatest orchestral works, including his three other symphonies, the Tragic Overture, the Violin Concerto and the Second Piano Concerto. Towards the end of his life he focused more on Lieder and chamber works, and in his final years composed great works such as the Clarinet Quintet and the Vier ernste Gesänge.

Brahms was a scholar on early music, and throughout his life proselytized the performance of music from earlier generations, while also providing encouragement to composers of the next.

The A-Z of Richard Strauss: B is for Johannes Brahms 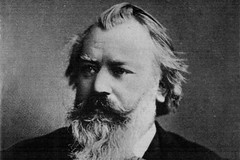 The elder composer influenced hugely Strauss, but was critical of his fan's musical style.