Director, writer, translator and composer Jeremy Sams created the translations for Rise and Fall of the City of Mahagonny, directed by John Fulljames, and Die lustige Witwe, directed by Graham Vick. He made his Royal Opera debut in 1989, as the accordionist in Berio’s Un re in ascolto.

As a director his credits include Die Fledermaus (Metropolitan Opera, for which he provided the translation), Peter Grimes (Grange Park Opera), The Wizard of Oz (West End and world tour), The Sound of Music (West End and Toronto), Noises Off (National Theatre, West End, UK tour and Broadway), Spend Spend Spend (West End and UK tour) and Benefactors (UK tour and West End). As a musical director his credits include The Winter’s Tale and As You Like It (RSC), Sunday in the Park with George (NT) and Assassins (Donmar Warehouse). As a composer for film his credits include Le Weekend and Enduring Love (winner of the Ivor Novello Award for Best Film Score), and for theatre numerous credits with Manchester Royal Exchange, RSC and NT, among others. 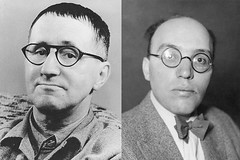 Writer and lyricist Jeremy Sams on the pressures of translating an opera.