Mexican tenor Javier Camarena made his Royal Opera debut in the 2016/17 Season as Count Almaviva (Il barbiere di Siviglia). He returns in the 2018/19 Season as Tonio (La Fille du régiment).

Camarena’s recordings include the solo albums Recitales and Serenata and the highly acclaimed 2018 Decca album Contrabandista. He was nominated for Best Male Singer in the 2016 International Opera Awards.

Your Reaction: What did you think of Rossini’s The Barber of Seville? 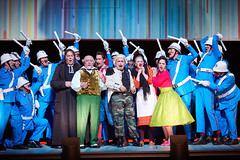 Moshe Leiser and Patrice Caurier’s production of Il barbiere di Siviglia has been a firm favourite at the Royal Opera House since its 2005 premiere.