Jane Gibson made her Royal Opera debut in 1991 as director of movement for Gawain, and has since returned to The Royal Opera for La traviata, directed by Richard Eyre, and Giulio Cesare in the Barbican theatre, directed by Lindsay Posner. Other work at the Royal Opera House includes Heart of Darkness (Opera East/ROH2) in the Linbury Studio Theatre.

Gibson studied acting at the Central School of Speech and Drama and later with Jacques Lecoq in Paris. She also trained as a movement teacher and has taught in drama schools. She was Head of Movement at the National Theatre 1999–2009 and has also worked for the Royal Shakespeare Company, the Almeida and Cheek by Jowl. Her many theatre credits include Andromache (Paris), Macbeth (world tour), A Midsummer Night’s Dream (Sydney) and Twelfth Night (Regent’s Park). 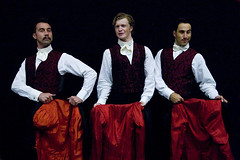 We take a look at the movement behind the melancholy in La traviata.