Dupont was born in Chatou in Paris. He became interested in art from an early age, first teaching himself to paint and later studying with a number of professors. In 1924 he joined Diaghilev’s Ballets Russes, where he worked with contemporary painters, musicians and dancers. His first work was Strindberg’s La Sonate des spectres starring Marcel Herrand, then a production of Stravinsky’s L’Histoire du soldat. He received the Grand Prix du Spectacle for his designs for André de Richaud’s Hécube. He made his opera debut in 1939 on Sauguet’s La Chartreuse de Parme, and went on to design for many companies, including the Paris Opéra, Opéra Comique, La Comédie-Française, Opéra de Marseilles, Metropolitan Opera, New York, Grand Ballet du Marquis de Cuevas and for Petit.

His other designs for ballet include George Skibine’s Romeo and Juliet (1970), Rosella Hightower’s The Sleeping Beauty (1970), John Cranko’s Carmen (1971) and Attilio Labis’ Coppélia (1975). 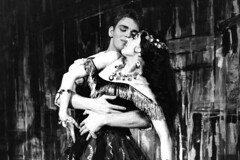