French notator Gregory Mislin is a Benesh Notator for The Royal Ballet. He joined the Company in 2014 and has since written new creations of works including Liam Scarlett’s Sweet Violets and The Age of Anxiety and Hofesh Shechter’s Untouchable.

Ballet's secret role: What is a ballet notator and why are they vital? 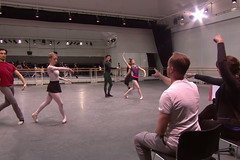 Dancers and choreographers may be household names, but without notators, your favourite classic ballet would no longer exist.