British stage director Gerard Jones was a member of the Jette Parker Young Artists Programme (2015–17). During this time he directed Oreste and two JPYAP Summer Performances, and assisted the directors of Orphée et Eurydice, Morgen und Abend, Eugene Onegin, Boris Godunov, 4.48 Psychosis, Così fan tutte, Written on Skin, Die Meistersinger von Nürnberg and La traviata. Engagements with The Royal Opera before joining the Programme included being assistant director on Anna Nicole, Gloriana and Quartett, and directing a revival of Il turco in Italia. In the 2017/18 Season he returned to direct La Tragédie de Carmen at Wilton’s Music Hall and to assist on Lady Macbeth of Mtsensk. In the 2018/19 Season he is Associate Director for Boris Godunov.

As a revival director Jones has directed Copley’s production of La bohème for Istanbul State Opera and David McVicar’s production of Les Troyens for San Francisco Opera. Original directing work includes scenes for the National Opera Studio, a semi-staged Siegfried at Bridgewater Hall with the Hallé and Mark Elder and Monteverdi madrigals in Bilbao. In 2018 he was a finalist for the European Opera Directing Prize. 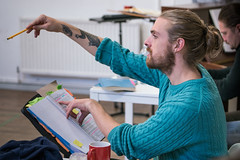 The director discusses his grungy new production of Oreste, getting a foot in the door as an usher and why he thinks some are intimidated by opera. 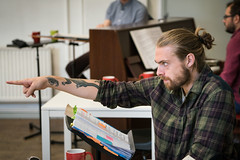 Gerard Jones in rehearsal for Oreste, The

Gerard Jones in rehearsal for Oreste, The

Gerard Jones in rehearsal for Oreste

Gyula Nagy and Gerard Jones in rehearsal for Oreste, The