Founding Choreographer of The Royal Ballet Frederick Ashton (1904–88) was one of the most influential dance figures of the 20th century. In his work with the Company he developed the distinctive ‘English style’, and left a vast corpus of works that are regularly performed by The Royal Ballet and companies around the world, among them La Fille mal gardée, Marguerite and Armand and Symphonic Variations.

Ashton was born in Ecuador to British parents. He first saw ballet when Anna Pavlova performed in Lima in 1917, later claiming ‘from the end of that evening I wanted to dance’. In England Ashton was tutored by Leonid Massine and made his choreographic debut for Marie Rambert in 1926. After working with Rambert and Ida Rubinstein, in 1935 he was appointed Resident Choreographer of Vic-Wells Ballet (later The Royal Ballet) by Ninette de Valois. With De Valois Ashton played a crucial role in determining the course of the Company and The Royal Ballet School. In 1963 he took over from De Valois as Director of the Company and in addition to choreographing introduced several significant works, including Bronislava Nijinska’s Les Noces and George Balanchine’s Serenade, and commissioned Kenneth MacMillan’s Romeo and Juliet. He retired in 1970 but continued to choreograph throughout his life, producing his last major work, Rhapsody, in 1980.

Ashton’s style is distinctive for its épaulement (the way the head and shoulders are held) and fleet footwork. All his works combine elegance with breathtaking technical demands. 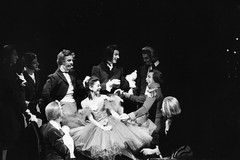 Your Reaction: What did you think of The Royal Ballet's mixed programme of Ashton ballets? 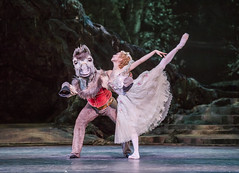 Audience reactions to The Dream / Symphonic Variations / Marguerite and Armand. 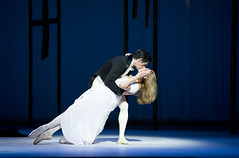 Everything you need to know about this mixed programme of great works by The Royal Ballet’s Founder Choreographer, Frederick Ashton.

Marianela Nuñez as Sylvia and Vadim Muntagirov as Aminta in Sylvia

Marianela Nuñez as Sylvia and Artists of The Royal Ballet in Sylvia.

Federico Bonelli as Aminta and Natalia Osipova as Sylvia in Sylvia

Valentino Zucchetti as Eros in Sylvia

Vadim Muntagirov as Aminta in Sylvia.

Marianela Nuñez as Sylvia in Sylvia.

Marianela Nuñez as Sylvia and Vadim Muntagirov as Aminta in Sylvia.

Natalia Osipova as Sylvia in Sylvia

Ryoichi Hirano as Orion in Sylvia

Ryoichi Hirano as Orion in Sylvia

Natalia Osipova as Sylvia in Sylvia

Frederick Ashton as the Showman in Petrushka, The Royal Ballet 1957. Photograph by Roger Wood

Frederick Ashton and Robert Helpmann in rehearsals for Cinderella

Frederick Ashton as The Showman in Petrushka