American soprano Francesca Chiejina joined the Jette Parker Young Artists Programme at the start of the 2016/17 Season. Her roles in the 2016/17 Season included Ines (Il trovatore), Voice from Heaven (Don Carlo) and Arbate (Mitridate, re di Ponto) for The Royal Opera and singing in Flight Pattern for The Royal Ballet. In the 2017/18 Season her roles include Micaëla (La Tragédie de Carmen), Countess Ceprano (Rigoletto), Melantho/Love (The Return of Ulysses) and Lady-in-waiting (Macbeth).

Chiejina studied at the University of Michigan with Martha Sheil and James Paterson and at the Guildhall School of Music and Drama with Susan McCulloch. Competition successes include reaching the semi-finals in the National Mozart Competition, winning the GSMD English Song Prize, second prize in the Classical Singer Competition and third prize in the Ann Arbor Society for Musical Arts Collegiate Young Artist Competition and National Association of Negro Musicians Vocal Arts Competition, and she was also a finalist in the University of Michigan Concerto. She has received Loveday, Marianne Falke, Maurice H. and Evangeline L. Dumesnil, George Shirley Voice and Willis-Patterson scholarships. 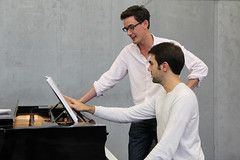 Francesca Chiejina in recital during Meet the Young Artists Week 2016