Colombian dancer Fernando Montaño is a former Soloist of The Royal Ballet. He joined the Company in 2006 as an Artist and was promoted to First Artist in 2010 and Soloist in 2014. He represented the Company in the 2007 Erik Bruhn Competition. He left the Company during the 2020/21 Season.

Montaño has twice won Personality of the Year award at the LUKAS Awards (2013, 2014), celebrating prominent Latin figures in the UK. His other awards include prizes at the International Ballet Contest, Havana, a Citation of Honor (New York) and an honour from the President of Colombia. He has modelled for Vivienne Westwood and choreographed and danced Alchemy for her Banqueting House catwalk show in 2008. His dance short film Narcissus had its premiere in 2014. He is a patron of the charity Children of the Andes, for which he has organized the charity galas ‘Fernando and Friends’. In 2019, he was awarded an Honorary Doctorate of the Arts, University of Bath. 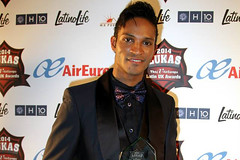 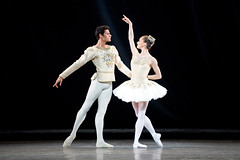 Awards celebrate the contributions of the UK’s Latin American, Spanish and Portuguese communities.

Fernando Montaño at the LUKAS Awards 2014

Elizabeth Harrod and Fernando Montaño in The Nutcracker, The Royal Ballet

Fernando Montaño and Tierney Heap in The Nutcracker, The Royal Ballet

Fernando Montaño as the Gypsy Girl's Lover in The Two Pigeons, The Royal Ballet

Fernando Montaño and Vivienne Westwood at the Latin-UK Awards.

Fernando Montaño as the Jester in Cinderella