German tenor Endrik Wottrich made his Royal Opera debut in the 2006/7 Season as Florestan (Fidelio) and has since sung Erik (Der fliegende Holländer) and Drum Major (Wozzeck) for The Royal Opera.

Wottrich was born in Celle and studied singing and violin at Würzburg University and singing at the Juilliard School of Music. He made his operatic debut as Cassio (Otello) in 1992 in Wiesbaden, and was a member of Berlin State Opera 1993–9. Wottrich has a long association with the Bayreuth Festival, where he has sung David and Walther von Stolzing (Die Meistersinger von Nürnberg), Froh (Das Rheingold), Erik (Der fliegende Holländer), Parsifal and Siegmund (Die Walküre).

Wottrich’s other engagements in Wagner roles include Tannhäuser for La Scala, Milan, and Lohengrin in Wiesbaden and Tampere. He performs at most of the major German opera houses and at other leading opera houses in Europe. He has a strong connection with Mannheim Opera House, where his roles have included Siegmund and Samson. He also performs widely in concert, in repertory including Verdi’s Requiem and Mahler’s Das Lied von der Erde. He teaches singing at Würzburg University. 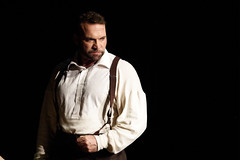 The German tenor, who sang in Fidelio, Der fliegende Holländer and Wozzeck for The Royal Opera, has died suddenly.

Karita Mattila as Marie, Endrik Wottrich as Drum Major and Sebastian Wright as the Child in Wozzeck