English director and writer Emma Jenkins made her Royal Opera House debut in 2016 as co-librettist with David Antrobus for Iain Bell’s In Parenthesis, performed on the main stage by Welsh National Opera.

Jenkins studied English at Oxford University. She began her career working as a staff director for English National Opera, working on more than twenty productions and directing revivals of The Force of Destiny, Figaro’s Wedding and Xerxes, among others. She directed the premiere of Mark Anthony Turnage’s The Country of the Blind for ENO Studio at the Aldeburgh Festival and the Queen Elizabeth Hall. Further directing credits include Le nozze di Figaro and Il barbiere di Siviglia for Grange Park Opera, The Threepenny Opera for Pimlico Opera and Acis and Galatea for the Iford Festival.

Other collaborations with Antrobus include an adaptation of Christopher Logue’s War Music for young people and schools, and a large-scale community project based on a dramatization of Jean Giono’s The Man Who Planted Trees. 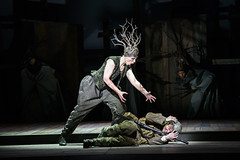