British-Russian conductor and répétiteur Edmund Whitehead joined the Jette Parker Young Artists Programme as a conductor and répétiteur in the 2018–9 Season. In his first Season on the Programme he conducted Phaedra, and was the trainee cover conductor on La traviata, a répétiteur for Hansel and Gretel, La forza del destino and Le nozze di Figaro, offstage conductor for Simon Boccanegra, and conducted a scene from Orfeo e Euridice in the JPYAP Summer Performance. In the 2019/20 Season he is Assistant Conductor for Werther, Death in Venice and La traviata, and a répétiteur for Fidelio, Jenufa, Tristan und Isolde, Elektra and Tosca.

Whitehead studied at Oxford University, the Guildhall School of Music & Drama and the National Opera Studio. At Oxford he was Conducting Scholar for the Schola Cantorum, conducted the Oxford University Sinfonietta and was Opera Studio Director for New Chamber Opera, where he conducted La Giuditta and La Calisto. At the GSMD he was répétiteur for The Rape of Lucretia, Šelma sedlák, Phaedra and Alexandre Bis and assisted on the Opera Makers project and Wolf-Ferrari’s Le donne curiose. He was Assistant Conductor on Don Giovanni for British Youth Opera (conducting the cover performance) and a Young Artist (2017–18) with Polish National Opera, conducting an education adaptation of Die Zauberflöte. He has held conducting positions with Central London Orchestra and the Arcadian Singers and is an alumnus of enoa workshops given by Dutch National Opera, and of the Académie of Aix-en-Provence Festival. 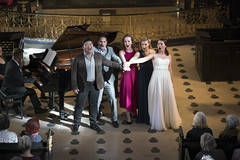 Edmund Whitehead in Recital at Lunch for Meet the Young Artists Week 2018, The Crush Room

Patrick Milne and Edmund Whitehead in rehearsal for Phaedra, The Royal Opera