American tenor Doug Jones made his Royal Opera debut in 2003 as Tobias Rigg (Sweeney Todd) and has since sung Pong (Turandot) and Young Servant (Elektra) with The Royal Opera.

Watch: Behind the scenes of Turandot 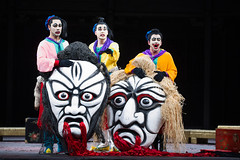 Another chance to catch films screened as part of our live cinema relay.