Ukrainian tenor Dmytro Popov made his Royal Opera debut in 2011 as Ivan Sergeyevich Lïkov (The Tsar’s Bride), and has since returned to sing Rodolfo (La bohème) and Alfredo Germont (La traviata) for the Company.

Popov’s concert appearances include The Bells with the Accademia Nazionale di Santa Cecilia under Antonio Pappano and with the Berlin Philharmonic under Simon Rattle, Verdi’s Requiem for the Tanglewood Music Festival and with the London Philharmonic Orchestra, A Life for the Tsar at the Festival Radio France, Montpéllier, and a recital at the Salle Pleyel, Paris. 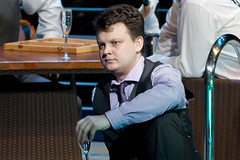 Cast Change: Dmytro Popov to sing role of Rodolfo in La bohème on 3 and 7 January

Marina Rebeka as Violetta and Dmytro Popov as Alfredo in La traviata, The Royal Opera

Dmytro Popov in The Tsar's Bride, The Royal Opera

Dmytro Popov in The Tsar's Bride

Dmytro Popov as Alfredo in La traviata, The Royal Opera